Just a Girl and Her Diary.

Young girls are always held to a higher standard of purity and innocence. Boys on the other hand, are encouraged to be free and taught to explore their desires. I always wondered, why is that?. The minute girls are born into the world we’re scrutinized and our bodies are over-sexualized.

Every woman has been told something like this when they were younger: “Cross your legs when you’re wearing a dress”, “be more ladylike”, “be polite”, “no sex till marriage”, “don’t be fast”, “don’t bring home no babies”, “girls should play with other girls, not boys”, “put on a bra when older male family members come over”, “don’t wear tight or revealing clothes cause you’ll look like a slut”, etc.

It’s honestly sick as hell. If you have to tell young girls these things then obviously, WE aren’t the problem. Most of the time we are hearing these things from the older women in our families-our mothers, grandmothers, aunties, teachers, our mothers best friends, the nosy neighbor, or the women and the people in the church.

If I’m really being honest here- a lot of men and certain cultures don’t even want daughters but they’ll rarely ever admit it. I’ve seen firsthand how some black men are more prone to stay with their child’s mothers if she has his son(s). Last semester, I had a chance to take a Women’s Studies course and the history of crimes against women and the female infanticides (mostly in Asian cultures) were the most horrifying.

Baby girls are often seen as burdens and financial liabilities. They could not carry on the family name or bloodline, inherit the family property, or perform as much manual labor on the family farm. So, as a result they are aborted, killed after birth, or abandoned. Did you know in the 1990’s, South Korea had the worst gender-at-birth imbalance in the world?

“When a girl is born, a universe of possibilities is born within her. When a little Black girl is born, she is born with the promise of a better future; her life represents new hope for breaking generational chains-of systemic oppression, of discrimination, of abuse-that have plagued our lineage. And it is because of the struggles of the strong women who came before that she is born with the potential to dream beyond what any of them ever could.“- Elaine Welteroth

If you have any young girls/daughters in your family- love on her and protect her at all costs but don’t smother to the point she has no control. Don’t project harmful traumatic narratives onto her. Don’t ever try to tell her she can’t do something because she’s a girl. Being born a girl is not a burden. Raise her to be smart, confident, independent, and courageous because the world is very harsh.

I know religion is a touchy subject for some, so I won’t stay on it for too long. But I believe most present-day Western religions are not FOR women. They all recognize only the male priest and worship only a male God in a heaven of male angels. I can only truly speak for the Christian/Baptist religion that I was born and raised into. Not only did I grow up thinking God was a male but I also believed he was a Caucasian male.

I was taught that women are supposed to save themselves for their husbands and submit, be the bearer of children, and do their wifely domestic duties. That women were created out of man’s image. That Eve was deceived and not Adam. That the husband is the ruler of the household and that women should stand by the husband literally through whatever. He should make all the decisions because women are incapable of leading. 1 Timothy 2:12 literally says: “I permit no woman to teach or to have authority over a man; she is to keep silent”.

Of course early Christianity times were a lot more strict than it is now but there are way too many contradictions, and various versions of the truth that just doesn’t sit right with me. It feels too controlling and you can really see how religion plays apart in defining society’s narrow gender roles. I’m not trying to discourage or make anyone stray away from their religious beliefs (everybody should believe in something) but I believe as women we have to do our own research and embark on our own spiritual journeys outside of religion.

I also believe young children, younger than the age of 7, should not be forced into religion, they should remain atheist. Why do you think churches are so set on grabbing young children into the church and into bible study immediately? It’s because the first 7 years of a child’s life are the most important and at those younger ages they are easier to “mold”.

Parents need to be patient and wait till their child show interest on their own. Once the child begins to ask questions about religion- THEN, you can show them and allow them to be able to choose for themselves what they want to believe in. I was forced to go to church so much when I was growing up that I ended up not liking church altogether. Why do you think so many preachers kids end up being the most rebellious of them all?

I recently read a book called Pussy Prayers: Sacred and Sensual Rituals for Wild Women of Color by: Black Girl Bliss, which was basically the sex education book I wish I would have read when I was a preteen rather than the generic bullsh** pamphlets that only taught me about STDs and how to change a tampon. This book really dives into how young girls and women should be taking care of our bodies from the inside out.

It’s empowering, liberating. This book also educated on ancient Egyptian history before western philosophers came along; how women were powerful queens and not servants or subjects. Another great book every woman needs to read and study is Sacred Woman: A Guide to Healing the Feminine Body, Mind, and Spirit by: Queen Afua. This book also goes deeper into ancient Egypt (Khamit) history that I personally feel more connected to on a spiritual level.

“Respectability politics creates an idea that only some women are worthy of respect or protection. Respectability narratives discourage addressing the needs of sex workers, incarcerated women, or anyone else who has had to face hard life choices. No woman has to be respectable to be valuable.”- Mikki Kendall.

And I don’t know who needs to hear this: but only respecting women you’re interested in doesn’t win you any brownie points either.

By now we all have heard “WAP” by: Cardi B & Megan Thee Stallion. It’s crazy how this song caused such an uproar, and I honestly love it. The misogyny (the hate of women) jumped out of a lot of men. Has male rappers not been rapping about the same things for years but the moment women start to do it- it’s a problem?. Please, make it make sense.

Our own President of the United States- Donald Trump has bragged about grabbing women by their pussies, wants to take away Planned Parenthood and reproductive resources for women, even attempted to take away our choice of having abortions. Women are still fighting for equal pay and opportunities, and the me-too movement is still pretty much a thing. I don’t know not one woman (including myself) who hasn’t been sexually assaulted or abused in some way.

Dear Women, the time we start taking our power back and doing whatever the fuck we want to do, is NOW. The policing of women’s bodies has to stop, period.

With the age of social media slut-shaming, many people have the construed idea that sexual liberation is just about women having more sex outside of marriage but it’s so much more. If people actually took the time to educate themselves then they would know this. Women shouldn’t have to feel shame or guilt in what they’re doing with their bodies because, it’s their bodies. It’s about choice.

Sexual liberation focuses on changing societal norms and personal upbringing that places women in a subservient role, and is also the loss of inhibitions regarding an individual’s sexual orientation.

To be sexually liberated means being free from all sexual constraints and it’s one of the most beautiful, most radical things a woman could ever become. We all are born liberated until society tells us we’re not.

For the longest time, I didn’t think it was okay to like sex as a woman or to be “sexy”. It took me a very long time to really enjoy sex and there are many things I’m still unlearning about sex in general. I viewed it as something I had to do in a relationship or “situationship”. Sex seemed to benefit men way more. The first rule to becoming sexually liberated is to understand that- pleasure is our birth right. Things are supposed to bring us pleasure.

You have to build a level of self-confidence/love and self-exploration with yourself first. Get comfortable with YOU. Understand what you and your body likes in order to communicate those things to a partner. I highly encourage building deeper mental connections and intimacy. I feel sex is a very sacred act which is why I personally do not like casual sex but it’s nothing wrong with women that do if she’s being safe. Sex is an exchange of energies. So, not only is it important to become self-aware but you have to be mindful about the partners you choose along your liberation journey.

*Reminder- Always have safe and consensual sex. Don’t feel pressured or obligated to do anything you don’t want to do.

In fact, sexual identity is very complex. A simplified definition- an individual’s personal sense of having a particular gender or a person’s identity in relation to their sexuality. Gender identity, sexual orientation, and romantic orientation are 3 integral components that determines a person’s overall identity. I know understanding this may be confusing for most but no matter how someone chooses to identify it’s important to be respectful.

Homophobia is so despicable. Anyone who is so bothered by the way someone else chose to sexually identify and live their lives do not have happiness within themselves. And although the attitudes and social norms have shifted significantly in regards to the LGBTQ community, we still continue to live in a world where gender and sexual minorities are targets for discrimination and hate crimes.

All forms of oppression is harmful.

I’m happy to announce- I’m a queer bisexual woman of color. I’m attracted to both men and women, I identify as a female (she/her), and I lean more towards a hetero-romantic orientation. And I will not be oppressed or silenced for who I am. I love women in all aspects and I’ll always root for us. Which was the leading motivator for writing this post. We are truly powerful beings and we should never make ourselves small in sake of society, men, or religion.

You are seen, you are heard, you are loved.

13 thoughts on “Pleasure is My Birth Right” 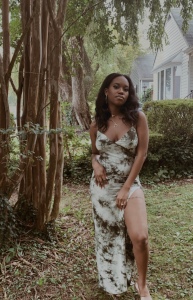 Hi there, welcome to my digital diary. My name is Tiffany. I’m a twenty-something millennial from Baltimore, MD. I’m a full-time healthcare worker, true crime junkie, bookworm, taco connoisseur, self-care enthusiast, a wanderlust, an INFJ-T, and I love to write. I created this small safe space on the internet to document my self-development, to share my thoughts, personal stories, and discuss topics that pique my interest. Feel free to take a look around & if you like it, subscribe and stay a while.